From morning till night, sounds drift from the kitchen, most of them familiar and comforting….On days when warmth is the most important need of the human heart, the kitchen is the place you can find it; it dries the wet sock, it cools the hot little brain.

It’s Autumn! Hooray! Autumn is my favourite season, narrowly beating out winter (which has Christmas and my birthday, so it does still rock!) thanks to all the amazing food, the crisp, crunchy leaves, and Hallowe’en, not forgetting blazers, jumpers and snug cardigans. With the onset of autumn, my tummy revels in comforting soups, spicy curries and hearty casseroles.  I find that these help me to acclimate to any sharp changes in the weather and to remind me that my two favourite holidays are just around the corner. The following recipe really seals the deal in reminding me that it’s autumn with the scent and taste of spices like cumin, cinnamon, cardamom and a hint of nutmeg wafting their way out of the oven.  The deep purple of aubergine, the bright orange of sweet potato, and the heady red of cherry tomatoes come together to remind me of the changing colours of the trees.

This recipe was inspired by one of my favourite bloggers – I’ve already shared two of her recipes on this blog – the wonderful vegan caramel used in this ice-cream cake and this scrambled egg recipe, which I  use nearly all the time.  I love Michelle’s Crockpot Lentil and Chicken Curry and it is one of my favourite staples, particularly during winter months. I wanted to make it during my last 2-3 weeks in Korea in an effort to use up some lentils but when I did, I had actually run out of canned tomatoes. I didn’t want to buy anymore as I was at the point where I needed to get rid of stuff, not buy new things. So instead I incorporated the spices Michelle used into a yogurt curry and threw a few other spices in as well.

When I first made this recipe, I marinated the chicken for around 30 minutes. I knew it wasn’t enough but, to be honest, I was too hungry to care! While I was waiting on the chicken to marinate I decided to throw some tomatoes, onion, and  aubergine (one of the people who had bought some of my kitchen-ware had gifted me about 10 aubergines!), in to roast them along with the chicken. It was tasty but not as tasty as I knew it could be. When I was telling my sister about this dish, she thought it sounded intriguing and as she, very kindly, has offered me the use of her kitchen, suggested I cook it for her and her family for dinner at some stage. 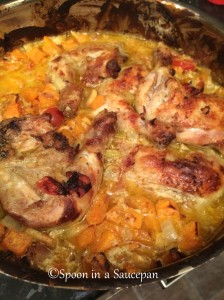 About 2 weeks ago, I made it for them but decided to use carrots, parsnips, sweet potatoes and butternut squash, mostly because I really couldn’t remember what I’d used in Korea but also because, well, autumn! While the chicken was lovely and tender, and the presentation was on point with the chicken legs positioned on top of the vegetables, the meal itself was a bit a disaster. It took so long and, even then not all the vegetables were completely tender. It was okay but everything tasted “separate” and far too sweet. I think it was the type of yogurt that I used as well as too much nutmeg, the immense cinnamon stick as well as the choice of vegetables that led to such a sweet taste.

Luckily, when I made this recipe this week gone out it was ah-may-zing! This time everything came together perfectly and the taste and aroma of the spices came through in everything from the onion to the chicken to the yogurt gravy the marinade created. Even better, the cooking time was much less (by an hour!) than the week before’s attempt. The key I found was to use a casserole dish that was not too deep or too thick, and to position the chicken and vegetables carefully to maximise roasting them to perfection. In fact, I used a casserole dish and a rimmed baking sheet as the chicken pieces were quite large but you could divide the meal between two casserole dishes. I bought four chicken legs and had the butcher chop them into two – so that I had eight pieces. All eight pieces did fit into the casserole dish once the vegetables had shrunk. While the  ingredient list is long, it’s quite an easy dish to put together and is best served with rice and/or naan.

Lastly, thank you to my sister and brother-in-law for allowing me the use of their kitchen and for letting me use the cherry tomatoes from their own garden.

PS Sorry for the delay in getting this post out, I had wanted it out on Sunday, but I got totally distracted by the Rugby and Football Matches (we won the Rugby but lost the Football #coybig!). We are in the playoffs though for the European Cup so hopefully we will win that!

*The cinnamon stick that I used, in the first attempt since I was home, was so fat. This time I used what looked like cinnamon bark, so if you using  a stick use a thin one. The photo below does not do justice to how thick this cinnamon stick was at all:

**I used sweet potato in this recipe but you could also use butternut squash. Follow the same process (around 2 cups) of diced butternut squash being par boiled before adding to the other vegetables.

***I used a fan oven so I am using the BBC conversion guidelines to adjust for a normal electric oven temperature.

Kid friendly: This dish is quite piquant so when serving to younger kids (my sister’s kids are under 5) have some natural yogurt on the table to mix with their curry.

Note:  I will be sharing this on Tell ‘Em Tuesday link up by peeled wellness