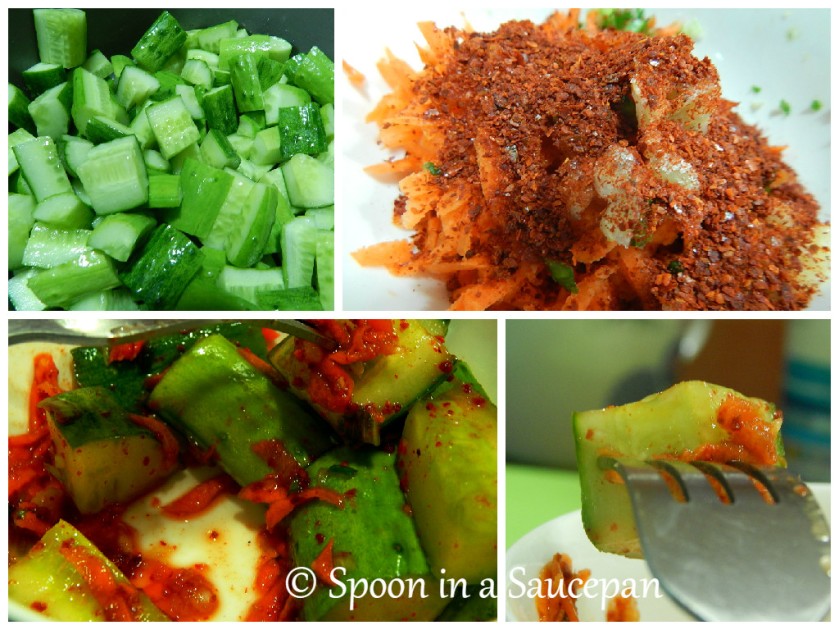 Note: Hi everyone, I want to apologise first off as you’ve probably noticed I haven’t posted much this last month. New recipes will be a little scattered over the next few months as well as I am finishing up in Korea and moving home. Further, I will be travelling the month of September but more on that later.  Consequently, other things have taken a slight priority over cooking: eating at all my favourite restaurants, weekend trips, goodbye parties, editing all my packing etc. I hope to post at least twice a month with a new recipe and the next one will be up soon.  Regardless of whether I get to post a new recipe twice a month I will still participate in the In My Kitchen Series by Celia @ Fig Jam and Lime Cordial and the Tell ’em Tuesday Link Up by Kim @ peeled. And on to today’s post:

A couple of months before I moved to Korea, my nephew had his first birthday. At that time, my younger brother was living in Korea and sent home some traditional Korean clothes for my nephew to wear to celebrate his big day.  Consequently, we had a Korean/Asian themed birthday party for him incorporating some Korean traditions and food. One of  the traditions that Koreans do  for a child’s first birthday is to display on a table several items including a spool of thread, a book and money. Each item  means something different for the child’s future: money equals wealthy, thread equals like life, and books that they will be a great student. With my nephew, we didn’t have everything that we needed, so we substituted other items and gave them different meanings. It was great fun watching him picking different things up.

The food was amazing with chapchae, bulgogi and kimchi being introduced to our palates for the first time. In fact, I made the kimchi and the recipe I had required 2-3 tsp of crushed red pepper. When my mom saw how much I was going to add, she quickly persuaded me to add only 1.5 tsp. At the time, I was really grateful because when we ate the kimchi it was too spicy for most of us! These days, I do eat much spicier kimchi but the memory of that day makes me want to introduce my family, and you, to what has become my favourite kimchi since living in Korea. It’s the only kind I will always go back for seconds or even thirds for: Cucumber Kimchi.

For my birthday, my friend, Kate, gave me Kye Kim’s Modern Korean Cooking cookbook. I’ve been browsing through it on and off since December but I only got around to making this recipe now. It was a bit milder than I am used to but her recipe is great for introducing those who aren’t big on spice to Korean food and this particular version of kimchi. I shared this dish with some Korean friends, one of whom is my school’s head chef, who made some suggestions to give it a little more spice and as a result I have slightly adapted Kye Kim’s recipe which I am sharing with you below.

This light kimchi is a great option for anyone who isn’t big on spice but wants to enjoy Korean food as the cucumber is cool and crisp in contrast to the heat of the red pepper powder.  Also, it’s a great salad to use with younger kids who you are introducing spice to, as the spice is a lot more subtle than with regular kimchi. The cucumber adds a sweetness that is usually only found in cabbage kimchi when fried. Further, the recipe is easiness itself and a great make-ahead dish as the kimchi should sit for 24 hours before serving/refrigerating.  If you’ve never had spicy food or Korean food, I would suggest making the recipe as per Kye Kim’s directions the first time but upping the ingredients starred below a little at a time to increase the flavour and spice on subsequent tries.

When I made this yesterday, I ate a bowl immediately, refrigerated another bowl and left the remaining kimchi to ferment for 24 hours. I’ll update you on my favourite later on!

**Kye Kim doesn’t use sesame seeds in her recipe but my schools always include them so I’ve added some to my recipe. I actually forgot to add them straight away so they are only added to my fermenting kimchi.

Serve with: Serve as a side dish to Tuna and Kimchi Fried Rice or with Fusion Tuna Gimbap. Alternatively, use as a slightly spicy salad.

Vegan/Vegetarian Option: Use a vegan/vegetarian fish sauce, or as suggested by Maangchi use soy sauce and salt.