I can’t believe another month has come and gone. 2015 is no longer creeping by but scurrying as fast as it can! Scurrying – that’s a great descriptive word, don’t you think? I love the image it conjures up – ants busy preparing for winter, squirrels hoarding as many nuts as they can and people running to and fro trying to get everything ready for the festive season fast approaching!

As I totally missed last month due to flying out to Nebraska on a whim, I am going to include some of my October happenings as well. My kitchen has several little things that are making life a teensy bit easier and a little more exciting. Some of these things are in preparation of the aforementioned scurrying as Thanksgiving has just gone and Christmas is approaching. Others are a reminder of trips taken, festivities that have been had and recipes that have been tried and tested, some of which have been perfected.

First up are my collection of spices (still growing). The glass jars on the bottom are from a shop called All Rooms in Dublin City Centre which was having a 50% off sale. The ones in the top photo are from a cute little shop in Prague that my aunt and I wandered into on our last day there. The larger picture is the tin where I will keep the remaining spice bags, which I got in TK Maxx.

Speaking of Prague, I went there for 3 nights from the 18th October with my aunt. It was great trip as the city is incredibly picturesque and full of fun things to do and see.  I brought back some salami and treats. They went over a storm and were demolished in less than a day.

When we were in Prague, I tried Medovnik, a honey and nut cake. Even though I am a sweet fiend, I really liked this cake as it wasn’t overly sweet and instead you could really taste the flavour of the walnuts. I also tried Trdlink which is a hallow pastry. It was lovely, sweet and sugary. I tried the original recipe but you could also get ones that were filled with chocolate. Now, that looked smashing! I really liked that you could tear the pastry quite easily which is nice for sharing.

Photo credit for Trdlink by my aunt DMS

For Halloween, we carved pumpkins (I drew the faces and the kids picked which ones they wanted), died “spider web” eggs (my nephew is obsessed with Spiderman), and made ginger cookies. My sister and I made his costume – he was supposed to be a St George (and the dragon) so we dressed him like a knight. I made paper bats based on Ed Emberley’s drawings to decorate the windows as well.

The second last Sunday we had my niece’s birthday and my contribution was a brunch of my French Toast Roll-ups and some fantastic Leek and Stilton sausages and Leah’s white pudding, we got at the BITE festival on the Friday before her birthday.  The sausages were incredibly tasty and the choice of stilton and leek really complemented each other. The pudding was amazing with a nice kick but which the 2 and 4 year olds could not stop eating. I also picked up some rather tasty basil and lime dressing  at BITE which is only just coming on the market. We tried all the dressing they had on offer (they just got a bottle supplier) and this was our favourite. I also picked up this wonderful blackberry balsamic vinegar.  I couldn’t decide between it and a cherry one so my cousin helped seal the deadlock for me.

For a couple of weeks in October and the beginning of November, I didn’t eat bread. This was really good for me as since then I’ve been eating less bread and I’ve been a bit more creative with my breakfasts. Since being to Nebraska, I’ve started eating bread again but I’m going to give it up for December until Christmas. One of the things that I had for breakfast was some leftovers of Selma’s Kale and Chickpea with Lemon Soup. It’s hearty, tasty and incredibly good right away as well as a few days later. I’ve made another pot of it since then and I plan on making another one in the next week or so.

Lastly, I helped my mom with a lot of chopping for Thanksgiving dinner and I made pumpkin pie, including the pastry from scratch! I’m not a baker at all as I’ve mentioned several times. Me kneading dough is a sight for anyone who needs a laugh but I’m really proud of my pumpkin pie. My sister showed me how to make the pastry and while I’ll need her directions for a few more times, this pie was a success. 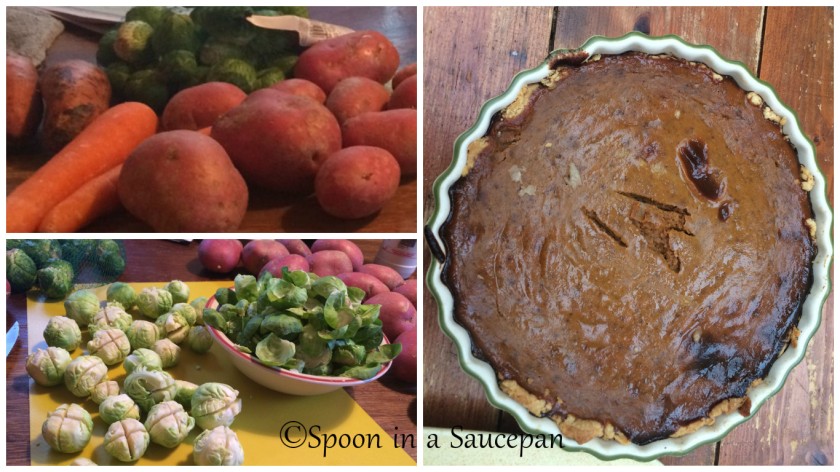 So that’s my October and November. I hope you all had lovely ones as well. I suggest that if you want to peek in some other kitchen’s to head over to Celia’s blog Fig Jam and Lime Cordial where she created and hosts the wonderful In My Kitchen series where I am sharing this post.

There was an error retrieving images from Instagram. An attempt will be remade in a few minutes.