“[Salad] freshens without enfeebling and fortifies without irritating.”

Well, it’s been two months since I last posted a recipe and man, has it been a very eventful two months. To begin with, as any regular followers of this blog would know, I was planning to leave Korea and return to my native Ireland in August 2015. I had been planning to return to Ireland for about a month before heading off on the Camino in sunny Spain. The Camino is a very, very long walk and the route I was going to take was around 700km. I was going to have some friends join me at different points for a few days. After that, it was going to be a winter of study preparation in order to do a CELTA course in the spring, plenty of cooking, and tons of walking.

Unfortunately, my sister’s death meant that I returned home two weeks early and all my plans got a little topsy turvy. The unexpectedness of her death and the amount of time it took to get her home, combined with an injured knee and general unfitness, led me to push my Camino trip off until the spring. Instead, over the last sevenish weeks since her death (three weeks since her burial), I’ve been working on promoting her final act of charity (she had been a Catholic Missionary in Liberia). Her final project before her death was to raise money for a summer program. If you are interested, you can donate to this program up until the 15th September when we will close the fundraising.

My sister and me, on my last visit home.

So what does the future hold for me now? Over the next few weeks I am going to travel around Ireland and the UK  with Kate and then I will come back to Ireland and start my study a bit earlier than I had originally planned. I want to just spend time with my family. I don’t want to have any regrets in my life. I want to live life fully, just like my sister did. Granted, I can’t be exactly like her – we are totally different people with many interests that didn’t even remotely correspond. One way to live my life more fully and to have fewer regrets was to get this cooking blog back on track. I had planned on doing at least one recipe before leaving Korea and a few before heading on the Camino. Instead this will be my first one in two months and it will be a couple of weeks before I get the next one out. Luckily, I have a few recipes on the back burner that I had been testing in Korea, so I just need to retry them here at home.

The following recipe was one I had been playing around with in Korea over the last few months. Since coming home, I’ve made several batches of my balsamic roasted tomatoes for my family and I wanted to somehow incorporate them into this recipe. I drew inspiration not only from warm salads but also from the presentation of one of my favourite Korean foods: Bibimbap. Last year, on a trip to Jeonju my fellow Native English Teachers and I were involved in a competition to make the best bibimbap.  The colours and layout of bibimbap is very beautiful and I loved mimicking that in this recipe. Instead of rice, I used couscous as I think it lends itself a little better to this salad. It also is one of the easiest things to prepare – some instant couscous, olive oil, and hot water. 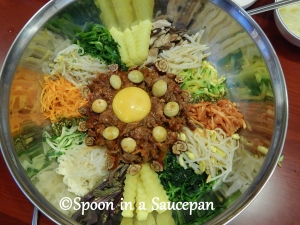 My favourite elements of this salad are the crisp freshness of the cucumber, the sweetness of the balsamic roasted tomatoes and the sharp bitterness of blue cheese. Additionally, I forgot the spinach but it is my usual go-to green for this salad. The warmth in this salad comes from the couscous and spiced potatoes. So without much further ado, I present the salad:

*This recipe only requires a few tablespoons of cooked couscous. However, I usually make up about a cup at a time and set aside the remainder for the next days’ meals. To make couscous, pour what you think you will eat into a heatproof bowl. Drizzle some oil or add a tsp of butter to the couscous. Top immediately with boiling water; I always use an electric kettle to boil mine. The water should just cover the couscous. Cover the bowl immediately with a plate or lid and leave it to stand for 5-10 minutes. I usually use the time it takes to cook the couscous to prepare my remaining vegetables. After 10 minutes, fluff the couscous with a fork and use immediately. If you aren’t using it all straight away, remove what you are eating and place the remainder in a container in the fridge.

** I love these balsamic roasted tomatoes and they have become a popular lunch item in my sister’s kitchen as well. Since coming home I have made these several times, (in fact when we have tons of cherry tomatoes in the house, my mam suggests that I make my oven tomatoes thingy to use some of them up!) and now I make enough to store in a sterilised jar. They are really handy for sandwiches, salads and pasta. If storing in a jar, refrigerate and use within 2 weeks.

Even healthier options: Add some black beans or green lentils to your salad for that extra healthy kick. You could also leave off the blue cheese for a lactose-free version. For a gluten-free version, substitute quinoa for the couscous.

For an even warmer salad: Make the balsamic roasted tomatoes (they need about an hour) to serve right from the oven.

For a larger crowd: Double all the ingredients and use as starter or side dish.